Roger lives across the street from Glencliff, but this was his first time to visit. A lifelong member of the Church of Christ, he had a special reason for coming. Reverend Sandra Griggs invited him to speak just before beginning her sermon.

My favorite parable is “The Good Samaritan” (Luke 10:25–37) because in it, you can find the practice of Christian living. That wasn’t the passage she preached on, but it came to mind as I listened to Roger.

Walking with a cane to the center of the sanctuary, he said that he didn’t think he would need a microphone. He began by explaining that he lived across the street, and had heard about the Village at Glencliff. The Village will be a micro-home community providing bridge housing to recently hospitalized individuals who have no place to call home and some of our most vulnerable friends. It’s been met with varied opinions, and some opposition throughout the neighborhood. So, I didn’t know what to expect from what Roger had to say. He began: 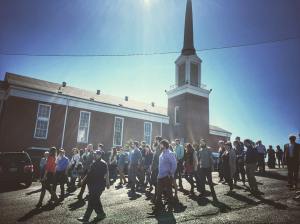 “I’ve thought about all the churches throughout America, and that if every church just took on one homeless person, we could solve this situation. I mean, churches are everywhere! I’ve come here because I wanted to thank you for what you’re doing with your property.  I’ve always wanted to work with homeless people, and now I can just walk across the street to do it. Thank you.”

Struck by his sincerity, I realized that the Good Samaritan story isn’t as simple as we sometimes make it. What happened to the guy who helped? What did people think of him for giving his money to care for a stranger? Was his wife angry? Were others who were staying comfortably at the inn mad for having their rest disrupted?

The Village at Glencliff is a reawakening of this parable – living out before our eyes, with all of the messiness that Christian living can bring. I followed up with Roger after the service, and videotaped our conversation. I hope that you’ll be as inspired as I am. If you like, you can watch it with others and reflect on these questions:

Just about everybody I know is living in some level of crisis or disruption. We don’t always see it on the outside, like we may among those living in poverty in America. God touches each of us uniquely to help one another. Praying that we have the courage, strength, resources and mercy to do so.

A social innovator in communication strategies & technologies for global development, Neelley is the founder of Harper Hill Global. Check out her game-changing work: harperhill.global.
View all posts by N. Neelley Hicks →
This entry was posted in Inspiration. Bookmark the permalink.